A step beyond 2D imaging

A study published by the Journal of Forensic Sciences shares insight into the use of 3D printed models as demonstrative evidence at criminal trials.

“This case report presents one of the first reported uses of a 3D printed exhibit in an English homicide trial, in which two defendants were accused of beating their victim to death. The investigation of this crime included a micro-CT scan of the victim’s skull, which assisted the pathologist to determine the circumstances of the assault, in particular regarding the number of assault weapons and perpetrators. The scan showed two distinct injury shapes, suggesting the use of either two weapons or a single weapon with geometrically distinct surfaces. It subsequently served as the basis for a 3D print, which was shown in court in one of the first examples that 3D printed physical models have been introduced as evidence in a criminal trial in the United Kingdom. This paper presents the decision-making process of whether to use 3D printed evidence or not.”

The study found that “Digital 3D evidence is a powerful instrument to add clarity to expert testimony and reduce possible confusion surrounding scientific or medical evidence, thus equipping the jury with the best possible means to reach a well-informed verdict.”

You can view the report in its entirety here 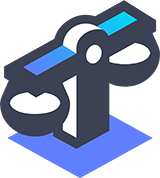